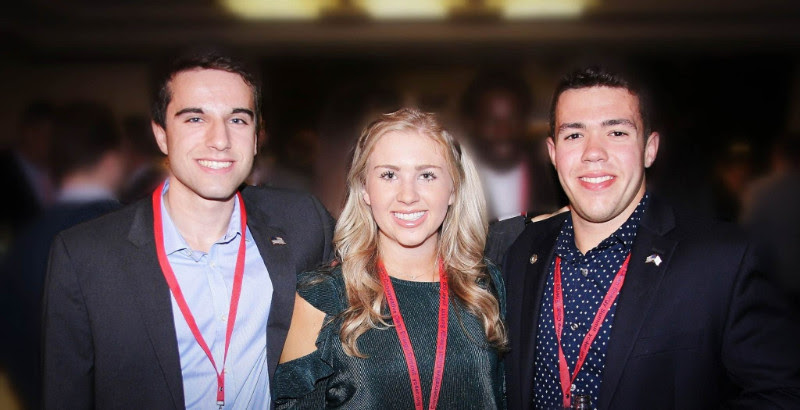 October 4-6, Chairman of the Rhode Island Young Republicans Rob Sullivan, President of the URI College Republicans Ed Tarnowski, and myself (Cory Pacheco) traveled down to the nation’s capital to attend the 3rd Annual Clean Energy Summit, sponsored by the Christian Coalition and Young Conservatives for Energy Reform. During our three days in Washington D.C., we were able to learn the important components of energy reform that young conservatives should be actively fighting for, while also hearing from various high-ranking military officials about the national security perspective of energy reform, and why it’s so important for America to be a leader in this area.

According to the CNA Military Advisory Board June 2017 issue, the world population is scheduled to rise from 7.4 billion people to over 9 billion by 2050, increasing the world’s demand for energy by over 30%. The demand for energy will also shift from large global economies like China to countries like India and those in Africa that are less developed and faster growing. The change in population and the availability in energy will have an effect on global economics and politics; members of the Organization of Petroleum Exporting Countries (OPEC), notably Russia and Iran, are positioning themselves to meet the fossil fuel needs of China and India, while China is aggressively expanding its investments in energy-rich areas. It’s easy to foresee the conflict that could come over the rise in the demands of energy, and how it will evolve into a crucial foreign policy issue.

As young conservatives, we must promote policy and attitudes that enable the United States to be at the forefront of the upcoming advanced energy transition. We must focus on removing government red tape currently blocking the installation of new clean energy policies. We must also expand energy freedom in the United States by deregulating energy and allowing for competition in the market nationwide. This has already started here in Rhode Island by allowing 3rd party providers to compete with National Grid for energy customers, and this trend should continue. State and federal governments must also continue to extend master partnerships to include renewable forms of energy, as well as expand energy freedom and opportunities for regular citizens to produce, control and sell their own power.

As energy technology accelerates, it’s important that the United States becomes less dependent on imports and focuses on exporting clean and renewable energy sources. By doing this, the United States can avoid intervention in the Middle East, which has had negative impacts on our economy and caused the loss of American soldiers. Energy reform is not just a factor in domestic policy; the creation of a national energy strategy must also be a part of our national security and foreign policy approach. With the growing tensions in the Middle East, a more efficient energy policy will provide the U.S. Armed Forces with the technology to conduct more efficient missions using the DOD’s newer technologies, and also allow for fewer soldiers on the ground.

The transition to advanced energy that is slated to occur will have a major impact on global politics and economics. Like industrialization and other vast transitions before, some countries will thrive and embrace the change through preparation and conservative policy while others will falter. The United States must begin to take action in constructing an energy policy that can endure because it is not only an economic policy but an area that will play a large role in the future of foreign policy. Currently, the United States is positioned to continue to be a leader in the years to come, but it would be wise for the current administration to use clean energy as a diplomatic tool in areas like India and Africa. It’s also a smart investment; every dollar invested in energy efficiency results in a $4 yield, which could help our economy in the long and short-term by creating jobs like the solar industry has done through tax credits and its rise in prominence.

For the sake of our children, and the generations of children to come, we as conservatives must focus on creating policies that will lead to clean air, water, and energy for all of our citizens. We have the people in office right now that have the power to make these changes, and we cannot afford to allow opposing superpowers to have a leg up on the best country in the world.

Below Are Some Photos That Were Taken At The Conference Ed Tarnowski & Myself at the Tesla Reception